The early fifties was marked by the death of Arthur Davidson,
last survivor of the four founders of the brand, at the age of 69 years in a car accident.
Begins production of small displacement bikes such as the "Hummer"
copy of the German DKW 125 confiscated by the Allies under the war reparations.
Equipped with single-cylinder two-stroke 125 and 165 cm3. 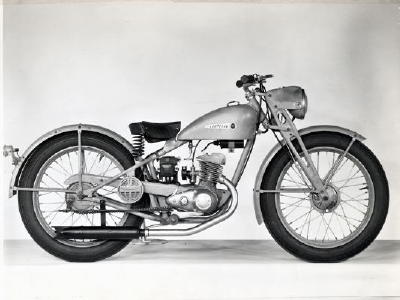 Like Brando, aka Johnny riding a Triumph Thunderbird in the Wild One,
American youth prefer the quick and handy British bikes to big Hydra
Triumph elapse during this decade over 40% of its production overseas. In 1951 Harley-Davidson and Indian are getting a 40% surcharge on import motorcycles.
The British group with AMC (AJS, Matchless, Royal Enfield, Velocette and Norton)
circumvent the law by buying Indian.
To counter the standard British motorcycle with a manual clutch and a footswitch.
Harley launches in 1952 the K model, but the lack of power of the V-Twin 750 cm3 side
this machine will be a relative commercial failure. 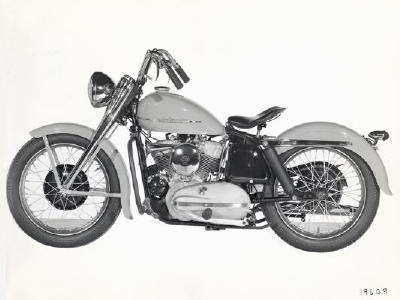 
For these fifty years Harley-Davidson remains with the demise of Indian,
the sole survivor of the American motorcycle industry.
Appearance of V in the logo of the firm, in 1954 the fate Harley 55Ci KH (883cc),
KHK then in 1955, these machines allow the 160 km / h thanks to the engine 38ch.
56 in the firm offers three all-terrain models, the KR, KRTT, KHRTT, these machines
are equipped with the engine 45 cubic inches, but soon disappears in 1958.
1957 generates the most commercially successful of the Motor Co.
This is the birth of the Sportster, which unlike the British production,
"Little Queen" Milwaukee evolve year after year ... and that to this day! 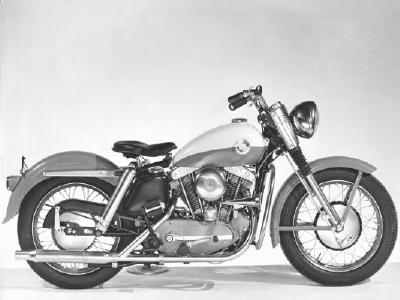 1958: With the duo-glide the big-twin are finally fully suspended
it also introduces many new features, including a redesigned rear fender,
a new chain guard, from whitewall tires, a two-tone paint
and the hydraulic rear brake. 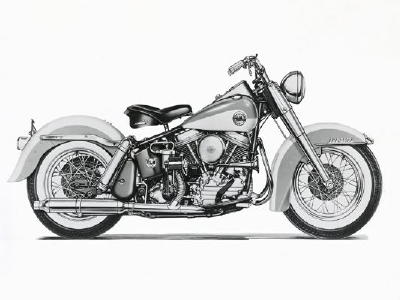 1959 marked the arrival of the Japanese competition, Honda's head.