William Harley (21 years) and Arthur Davidson (20 years), are employed at the factory Bart Manufacturing
in Milwaukee. They spend their leisure to design a combustion engine. Based on a De Dion - Button engine 1895
they build their first engine to power a fishing boat.
It was around September 1900 that Bill Harley Arthur decides to create a motorcycle.
The result pays off since early January 1901 four engines are ready to
be mounted on a conventional bicycle frames. They face low
engine power copied the French technology (0.5 horse)
who can not climb the steep odds, and the fragility of the chassis.
With the help of one of the brothers Arthur, Walter used to railways,
that goes in his spare time working on the design and manufacture
the prototype between 1902 and spring 1903.
The family kitchen (workshop) becomes too small for such an undertaking,
Davidson's son persuaded their father to build a cabin,
and recruits the third brother Davidson, William (machinist) and Ole Evinrude
(Which takes care of the carburetor made "according to legend 'from a tin). 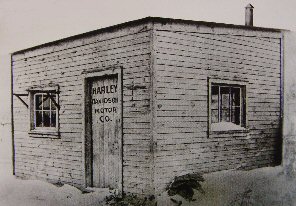 The group eventually create a single-cylinder 405 cm3 issuing two horses.
The chassis has been reinforced at the steering column.
It is covered with a black paint decorated with two gold striping brush
and red lettering done by Janet Davidson's aunt.
Finally, the two-wheeler up the ratings without using the pedals,
and can reach speeds of 45 mph (70 km / h).


In 1904 to enable the production of 8 copies of "The Silent Grey Fellow"
(The gray silent partner), they double the surface of their workshop.
To team up with his brothers, Walter left the railway, parallel
William Harley between motor mechanics training at the University of Madison.
In 1906 Harley-Davidson built his first building on the Avenue Juneaux, current headquarters of the company.
That year, there are 50 machines out of their workshop. 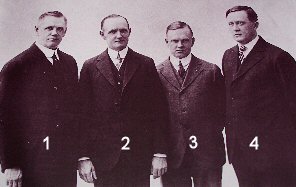 It is September 17, 1907, four years after the launch of the first motorcycle,
Harley-Davidson Motor Company officially enters the trade register of the U.S..
It was Walter Davidson (2) becomes the first president of the HD Motor Company,
W.Harley (4) was appointed chief engineer, A.Davidson (3) sales manager,
and W.Davidson (1) directs the workshop. Production reached 150 copies.
W.Harley in 1908, back from university, studying a more powerful engine.
Instead of creating a new block, graft directly on the silent gray Felow a second cylinder.
It uses a forked connecting rod which joins in the same plane with that of the cylinder to the crankshaft.
HD innaugure a numbering system by the year 1904, the year 0 of the production.
The 1908 models are called "model 4". 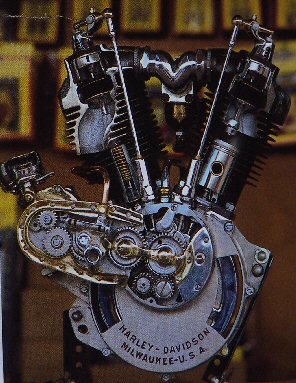 The HD V-Twin was born!

The 5D model in 1909, with the first V-twin engine, appears on the U.S. market.
This engine, with two cylinders positioned at 45 degrees, with a capacity of 7 HP
The intake valves are more advanced but tumbled as the single cylinder.
that's the particular form which will be separated from the HD in the history of motorcycling.
For this first year only 27 V-twin will have a market at a price of 325 dollars.
It is temporarily withdrawn from the market because there is no clutch system makes it unusable. 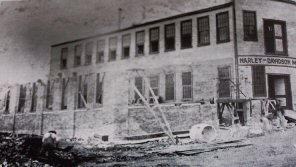 The workshop of the Harley-Davidson Motor Company doubles in size and becomes a plant.