2000 - To equip the new engine Softail, Harley must rework the framework
and to mount it without Silentbloc the Twin Cam now in version B, "no vibration"
through a balancing contrebalancier driven by a chain on the right side of the engine.
The new Softail "Deuce" also benefits from the injection, 4-piston brake calipers and a
more precise gearbox eliminating false dead spots that will be generalized to the entire range.

2001 - End of an era, with the advent of standards "anti-everything," Harley-Davidson unveiled the 2002 VRSC model
(V-Twin Racing Street Custom) tell V-rod, equipped with 60 ° V-Twin liquid-cooled 1134cc.
With the "V-Rod" Milwaukee demonstrates the constructor for its technical competence to face the Japanese.
And it was not half measures: Derived from the competition program "VR-1000" (abandoned that same year),
its engine developed jointly between the design offices of Capitol Drive and Porsche,
delivers no less than 115hp thanks to its dual overhead cam head causing four valves per cylinder.

- The 883 will offer a "facelift" with profusion of new elements on an initial range: saddle shaped,
2 into 1 exhaust, dual front discs. The XL 883R (R for Racing) pays homage to the brand XR 750
with this orange and black paint, dear to the Racing Department.

HARLEY-DAVIDSON celebrates this event with a touring festival that travels around the world.
SEE THE OPEN ROAD TOUR


The celebration of Milwaukee collects in this anniversary year over 150,000 people.
The 2003 vintage is available for the first time in bi-color, black and silver or "100 th Anniversary".
All Big Twin sold in France, abandoned the carburetor to electronic fuel injection.

Comparison to 2003 is also the centenary of the first flight. On 17 December 1903 at Kitty Hawk,
the wright brothers first flight to perform a 12 seconds at a height of 120 feet.

2004 - A second V-Rod was born, which differs from the previous by the letter B after VRSC.
Harley-Davidson warranty is extended to two years and the password change intervals from 4000 to 8000 km.
Andrews won the championship Hines Pro Stock dragster. 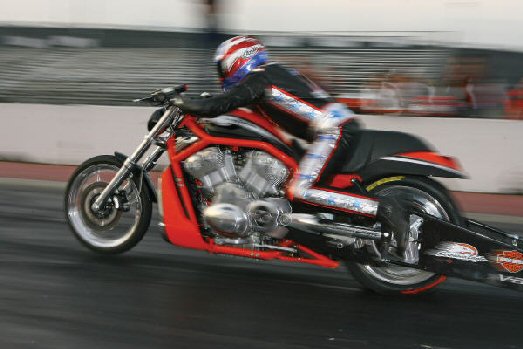 The title for V-Rod drag

2005 - Renewal of the Dyna range. She received a 6-speed transmission is equipped with the Twin Cam 88 1450 cm3
(Without balance shafts), mounted on rubber mountings more robust in a frame fork .. inclined FX and the reservoir Fat Bob.

Out with the VRSCR Street Rod of the first Harley Davidson motorcycle designed for the European market.
Andrews Hines brings in the second consecutive Pro Stock Dragster.

2006 - The 35th Anniversary Super Glide FXDI pays homage to the original colors red, white and blue,
the FX 1971 Super Glide. Special paint and his reasons echo those of the original model,
including a metal emblem featuring the famous Number One logo on the tank 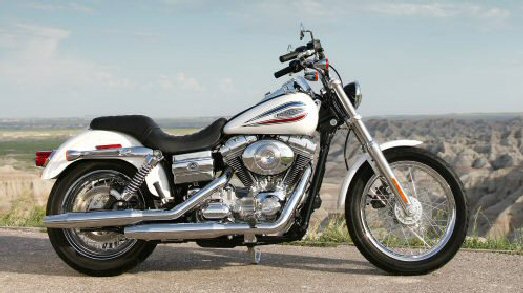 The VRSC is now in version D Night Rod with a deep black that is beautifully highlighted its chromium
and its full perforated rims, VRSCD the benefits of a fork is less steep, with a lowered seat
and re-designed, a small wind deflector. Like all VRSC, the Night-Rod inherits new Brembo brakes. 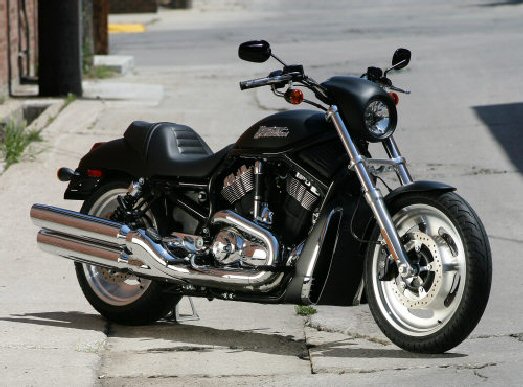 - Presentation of the new engine 2007 vintage the Twin Cam 96 associated with a 6-speed gearbox. PUB Twin-Cam 96

2006 models only required minor modifications to accommodate the Twin Cam 96 and 96B which team the
2007 vintages, as this FXDBI Dina Street bob with solo seat and ape-hanger 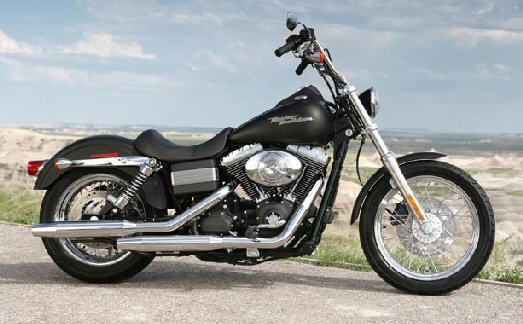 
A turning point in the global market for the Firm? For the first 8 months of 2007 sales in the Americas were down,
and as they are the 3/4 sales World, the consequences are felt quickly.
Meanwhile sales in the Old Continent and France are up 15%. Europe and Asia do appear to future markets for
Harley-Davidson, which offers special equipment to European riders on its new 2008 (ABS, extended suspension
stroke, increases in engine capacities ...). 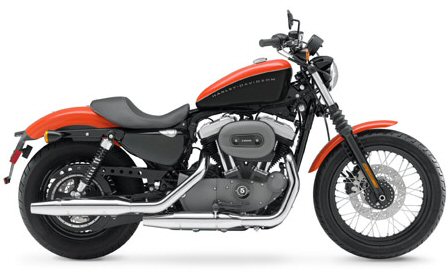 Presentation of the new 2008 models with the Sportster "Nightster" which benefits from a suspension stroke
lengthened for better angles in turns of European roads, but especially the 1200XR scheduled for fall 2008 Created
specifically for Europe, 1200 does not inspire unless the American star: the 750 XR 70s, or the XR 1000 to 1984
not approved in France. With this package puts 1200XR HD: Showa suspension, including a 43 mm inverted fork
and Dunlop Qualifier tires come standard for a ride worthy of the name, Nissin brakes "high performance" to stop this "large cube". .. 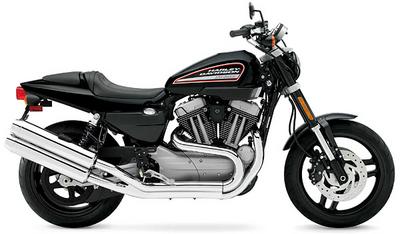 Also new the 2008 Softail Rocker: a custom voluntarily clean and equipped with the new rear "Rockertail",
which attaches directly to the fender to the swingarm supporting the rear wheel 240/18.
The engine is the 1600cc Twin Cam 96B counter-balanced solidly mounted, and a transmission 6-speed Cruise Drive.
Two versions of saddle: a mono and a "double" stylized for Rocker C, which also benefits from more chrome. 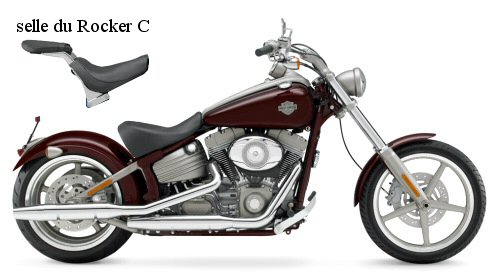 News from the Fat Bob Dyna family re-styled with its double headlight, its imposing 49mm diameter fork and his new Tommy Gun exhaust.
The V-Twin engine "Revolution" liquid-cooled, which equips the V-Rod and Night Rod,
1130cc to 1250cc increases from 123cv and 115Nm for.


February 2008 HD Softail has a "old style" which has the name Cross Bones a proper term to the world of pirates
and their famous banner! With bulk as arguments: springer fork, saddle suspended,
cat-eye dash and leather tank panel, wire wheels, handlebar-Ape Hanger, fenders and running board "old school".
Mechanics is the rigid-mounted Twin Cam 96B with an oil tank in a horseshoe. 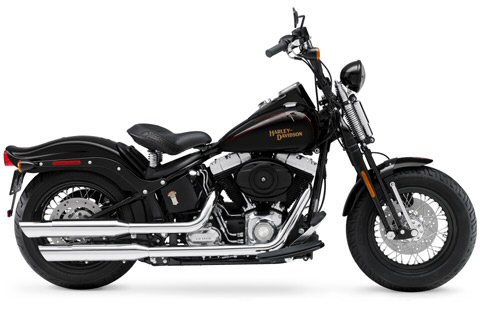 
July 2008, Harley undertaker spaghetti! By acquiring the MV Agusta Group is a firm foothold in Europe and takes over control of MV Agusta Cagiva.
Since 2006 the group was experiencing financial difficulties to arrive at close to 45 Million  uros,
HD takes debt and added $ 25 million for the Castiglioni family holds 95% of capital.

January 2009, Harley has not escaped the crisis!
The year 2008 ends with a 30% drop in profits (which is greater than $ 650 million!).
despite this the group is preparing to cut more than 700 jobs in 2009 and
provides for the closure of two manufacturing mechanics.
Explanation of CEO James Ziemer: "we need to make adjustments corresponding to the current decline of our
production and we are determined to do it, so as to be more competitive in the long run."

1st May 2009, after 40 years of loyal service James L. Ziemer leaves the direction of Harley-Davidson< to Keith E. Wandell.

Black is always fashionable, and not a lot HD th "Cuscom Night" (Night Rod, Nightster ...).
This time the Sportster Iron 883, probably in honor of XLH "Ironhead" (1957-85). skinned and dark,
the Iron 883 bike is reduced to its simplest expression. And this is its major asset
with a "prize" of approx.  8,200 to enter the Harley legend.
With more than 20% of Harley sales worldwide, the Sportster is very far from dead! 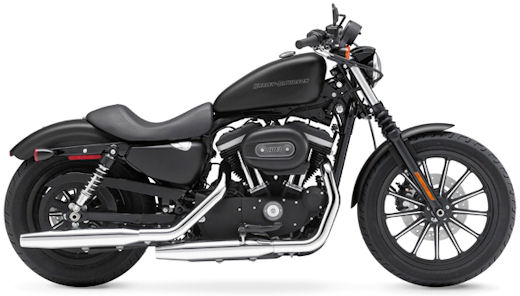 
Commemorating the 65th anniversary of the landing in Normandy alliers. A hundred machines of the brand of '30s
and '40s, WLA, WLC and UL Servicar Side Car, models that have marked the history of World War II honor
the men who have been through hell D-Day by a parade in St. Mere-l Eglise June 6, 2009. 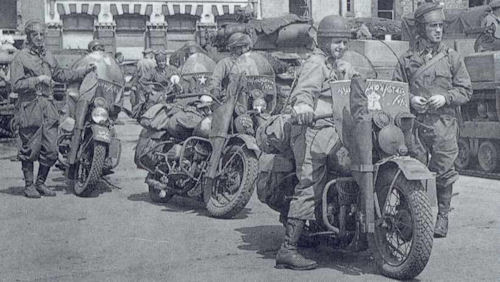